Chester in One Day 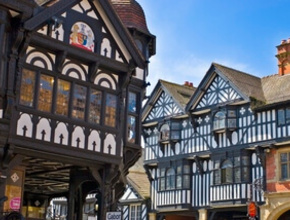 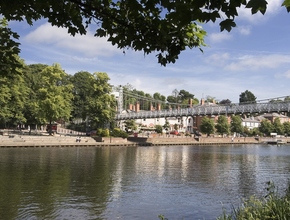 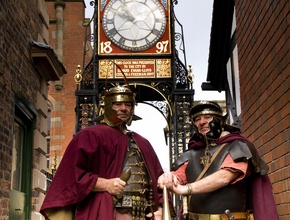 Meet your Premium Tours representative at Euston Station to collect your tickets and itinerary for the day then relax and enjoy your train journey to Chester.

Chester was founded as a “castrum” or Roman fort in the year 79 AD by the Roman Legio II Adiutrix during the reign of the Emperor Vespasian. Chester's four main roads, Eastgate, Northgate, Watergate and Bridge, follow routes laid out at this time – almost 2,000 years ago. No city in Britain is richer in terms of archaeological and architectural treasures than Chester with its Walled City on the River Dee.

The City Sightseeing Chester Open Top Bus Tour will introduce you to the City Walls, the Cathedral, Roman Amphitheatre and all the things to do in the city. Discover how Chester has survived and prospered through the ebb and flow of history as you are transported around the city. Join the tour at the Rail station (every 20/30 minutes) and enjoy a one hour guided tour of the City.

Then free time in Chester and here is some background to this fascinating city. Each chapter of Chester’s history is etched into the very fabric of the city – walk where Roman Legionaries marched to war, Viking raiders wreaked havoc, a civil war siege took place and Norman invaders conquered Anglo-Saxons.

The city features a host of classic heritage including the world-famous, two-tier Rows shopping galleries as well as the most complete City Walls, largest Roman Amphitheatre and oldest racecourse in Britain.

The city is also home to a 1000 year old Cathedral featuring Europe’s finest example of medieval carvings and a brand new Cathedral at Height attraction giving access to one of its sky-high towers via hidden passageways and ancient chambers.

·         Meet the Premium Tour representative to collect your tickets and itinerary for the day  outside the Euston main ticket office at 07.40 am for an 8.10 am train.